Music has been shown to have positive effects on Dementia patients by boosting their brain activity and helping them recall memories and emotions they attached to those memories.

Studies have shown that patients display enhanced mental performance after singing classic hits and show tunes from movies and musicals from their era, and this brings us one step closer to a breakthrough in managing this cruel disease that effects up to 413,000 in Australia today. 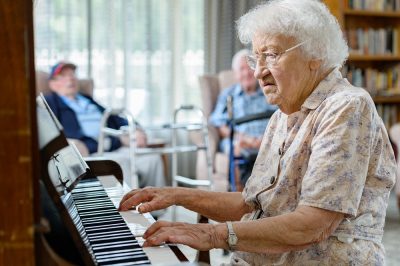 A link between music and being able to reach Alzheimer suffers beyond their disease was shown in a compelling YouTube video in 2012 that immediately went viral. During a documentary people were introduced to an elderly resident called Henry who had suffered from dementia for a decade. Henry spent most of his day alone in his wheelchair unable to communicate. In the documentary he was given headphones and an iPod loaded with music from his era and suddenly he comes to life, singing his favourite tunes word for word and reminiscing about how much he had loved music and dancing as a youngster.

There are several reasons researchers believe music boosts brain activity. Music evokes emotion, and emotion can bring with it memory, which brings back the feeling of life when nothing else can. When used appropriately, music can shift mood, manage stress-induced agitation, stimulate positive interactions, facilitate cognitive function and coordinate motor movements.

Musical aptitude and appreciation are two of the last remaining abilities in dementia patients.

Humans tend to remain contactable as musical beings on some level right up to the very end of life. The auditory system is the first part of the brain to fully function in-utero at 16 weeks, which means that you are musically receptive long before anything else. So when it comes to a dementia-type breakdown of memory it’s case of first in, last out.

At Infinite Care our Lifestyle team regularly organise outings for residents to see local musicals, and hold in-house singalongs around the piano. We also provide a full range of technology options and devices, like tablets and ipads, that can hold and play music of the residents choosing.

DISCLAIMER: This document and the information contained herein is provided for general use and informational purposes only. It should not be considered personal advice in relation to legal, financial or healthcare matters. You are encouraged to consult other sources to confirm the information contained in this document, and if appropriate, seek independent expert advice from an appropriately qualified legal practitioner, financial advisor or healthcare professional.  Infinite Care Pty Ltd and its related parties do not represent, guarantee or accept any liability whatsoever in respect of the accuracy, currency or completeness of any of the material contained in this document. This document may not be reproduced or published in any way or by any means without our prior written consent.