Alun and Doreen’s Story: A love story 70 years in the making

On the 9th of September 2020, our Caravonica Waters resident couple, Alun and Doreen will celebrate 70 years of marriage! From their first meeting at work in the UK, to emigrating to Australia to conducting a busy life raising five children – they have certainly packed a whole lot of living into their love story. 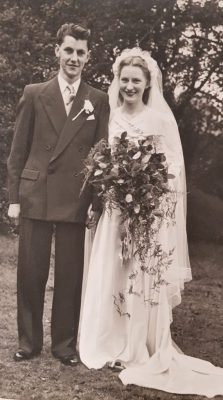 Alun Jones met a sweet 16-year-old Doreen, when he was 20 years of age. He was visiting his brother when he saw Doreen walking down the street and asked his brother if he knew who she was. He didn’t, but he did know she worked in the Wages Office for GEC England – where the brothers also worked.

The next day Alun popped in to see Doreen in his lunch break and ask her on a date to the movies. As she was only 16, she told him she had to ask her mother’s permission, which she gained.

Their first date went well. Alun walked Doreen home after the movie, as the last bus had already left. Once out the front of Doreen’s house, Alun asked if he could kiss her. As any shy 16-year-old girl in those days would say, Doreen stated that she couldn’t because her mum might be looking. Alun cheekily said, “That’s okay, I’ll kiss her too!”

Alun and Doreen married on 9th September 1950 at the Trinity Church in Birchfied in the UK.

They started to notice advertisements and posters around town, showing Australia as the land of sunshine, beaches, outdoors and good schools. Alun had also spoken to colleagues who had family in Australia, and an Australian man from Bondi who he worked with.

Alun also saw advertisements in the newspaper calling for Tradesmen to go to Adelaide, so he spoke to his boss who wrote to an affiliated company in Auburn, NSW where Alun was offered a position.

It took around 6 months to co-ordinate the paperwork, passports, visits to Australia House for immigration papers and of course the final payment of the famous 10 pounds.

The ship ‘The Fairsea’ took 6 weeks to reach Australia. They remember travelling through the Suez Canal past ships going the other way and the passengers all calling out “Turn back, you won’t like it.”

Alun and Doreen arrived at Sydney Circular Quay on 24 December, 1959 during a heatwave. Alun commenced work the same week he arrived in Australia, travelling on a train to work that took a minimum of 90 minutes each way. They called the trains the ‘Red Rattlers’.

The family of five were lucky to be offered a house to stay in through connections at the GEC England. The owner of the home was a camp cook and would be away for six months. During this time Alun and Doreen purchased land and built a 3-bedroom home.

Doreen used to walk to the corner shop with her three young children to buy groceries, fruit and vegetables. On Saturday mornings Alun would walk over a mile into town to do a larger shop at Franklins.

Life got easier once they had wheels

They purchased their first Australian car in 1965. It was an HD Holden, and life became a lot easier when they were able to go shopping, to the river to swim, and parks to play and watch sports.

Doreen was able to move around more with a car and the children at school. She made many friends, with many friendships starting when they heard each other’s British accents in the shops, or at the doctor or dentist.

Doreen was also a Committee Member of a Women’s Club called the VIEW Club. It stood for; V = Views, I = Ideas, EW = Educations for Women. She was also the Secretary of the Nepean Jazz Club for many years, and a member of the local Smith Family Association fostering children.

In 1962 Doreen’s sister, along with her husband and three older boys, emigrated to Australia and lived with Alun and Doreen for over six months. By this stage Alun and Doreen had four children, which meant there were five adults, four teenagers, one child and a baby – all crammed into their three-bedroom house.

In 1969 Alun changed jobs to be closer to home, though this still required him to change trains twice as he left the car for Doreen so she was able to transport the children and do the shopping. 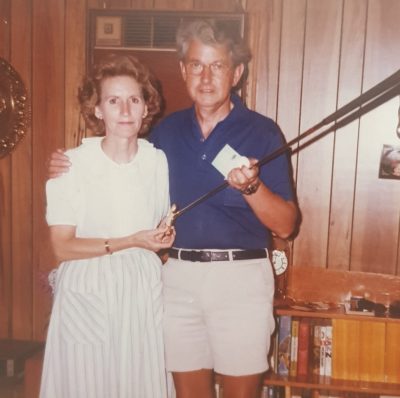 Alun commenced playing golf at 41, and won many championships at the A Grade, B Grade and later the Seniors. He continued playing golf once a week until he was 86 years old. He was also a Committee member in his workplace Social Clubs, and at the Golf Club where he helped raise money for many charities, including what was then Miss Australia.

Music was a big family love

Alun and Doreen loved ballroom dancing and danced there weekly. Doreen made all her own dresses, and all the children’s clothes until they commenced work. Doreen loved the 70’s Disco, The Hustle, The Bump – all of it – and she remembers dancing to ‘rage’ on the ABC with the girls in the lounge room. Alun loved watching along and had to negotiate around ‘Countdown’ so he could watch the Sunday football on their shared TV set.

The area they lived in for 58 years was multicultural, with many emigrants from the UK, Poland, Greece, Malta, Yugoslavia, Italy and Germany. Their children mixed easily, growing up learning other cultures in a natural environment.

Alun and Doreen have five children, 11 grandchildren and 10 great-grandchildren who all live in Australia across four states. They currently reside together in our Caravonica facility where they will celebrate their platinum wedding anniversary in an intimate gathering with local members of their family.