Dennis and Irene’s Story: Pairing a Jersey Boy and Author

When Irene Schaffer was seated across from a quiet man named Dennis Halls at meal time, she didn’t think much of it. Though being a long time author, Irene is naturally curious about people and their stories. So she struck up conversation with Dennis, and detecting an English accent she inquired where in England he was from. Well, Dennis was very quick to correct her! 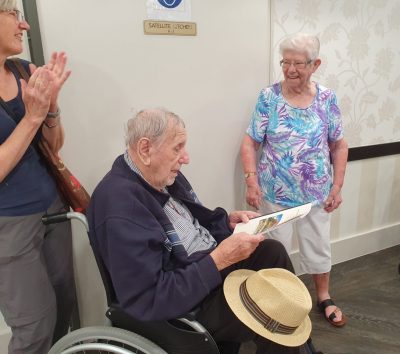 Irene presents Dennis with the book she wrote for him

Dennis was born on the island of Jersey – yes, where the Jersey Cows come from – in the English Channel. His family moved to England when his father took up a position in the army, but Dennis was sent back to what his parents believed was the safety of Jersey when World War 2 broke out.

Dennis was 11 years old when the Germans took occupation of the island of Jersey. If you have seen the movie, The Guernsey Literary and Potato Peel Pie Society, this may serve to visualise some of that time and situation. The island of Guernsey is so close to Jersey it can be seen from the shore.

As Dennis got talking, Irene quickly realised that his story needed to be told and that she was just the person to tell it on his behalf.

Irene has always been interested in history and has penned four published books and more than 50 other writings during her time – her website is jam packed with these historically based writings. She is a true seeker of knowledge and history, and a delight to speak to.

The journey of recording of Dennis’ story was a long one, with a hospital stay for Irene thrown in between their catch ups. But when they did meet, Irene would take Dennis to the café at Edmonton Gardens to buy him a coffee and just let him talk. At first she took written notes – until she discovered a neat little trick with her iPhone…the voice memo app! What a godsend. This made capturing his story a lot easier.

Dennis moved to a facility closer to his daughter recently and Irene was able to gift to the family a copy of the completed book. Irene admits she has delved deep into the history of Jersey and the German occupation – a true testament to her passion – but what an experience Dennis has shared! 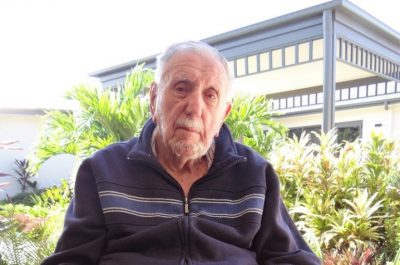 You can read Dennis’ story by clicking here.

We love this #feelgoodstory of an unlikely friendship born out of our Infinite Care community, and we love the fact this has been penned for future generations. The thought of peoples stories dying when they do is just a true travesty – so thank you to people like Irene who see the value of giving their time, and using their talents for others to benefit.